Accepting People You Dislike as They Are: How It Benefits You and How to Do It
By Daniel A. Miller 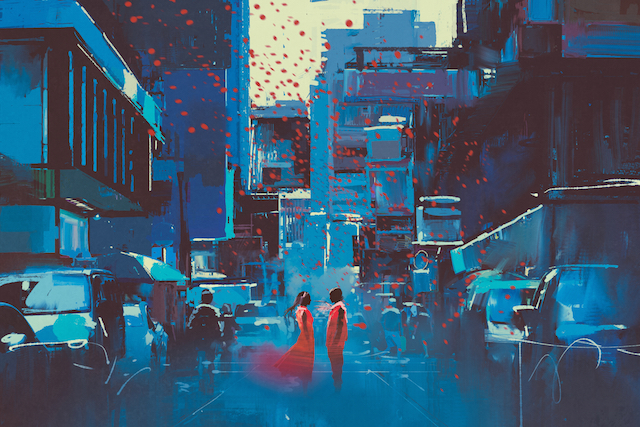 “We often give our enemies the means of our own destruction.” ~Aesop, The Eagle and the Arrow

We can sometimes have difficulty accepting our friends, family, and loved ones as they are when their habits, quirks, or behavior annoy us. Our natural tendency is to try to change what we don’t like about them, which often leads to resentment. Nonetheless, given their importance and presence in our lives, we are usually willing to make an effort to accept them as they are.

But what about people we dislike—people who cause us grief? For example, an overbearing boss, a scheming coworker, or an annoying relative. Should we also make an effort to accept them as they are?

Before you decline to do so, consider that when we don’t accept such people as they are (and more about what that means shortly), the adverse consequences for ourselves can be even worse.

One problem is that we will be prone to engaging them in combative, retaliatory ways, as was my modus operandi. I now realize that I suffered unnecessarily from my refusal to accept people I disliked or despised, in terms of both greater personal anguish and counterproductive responses to their actions.

And especially so when I was betrayed by a business partner several years ago.

I Refused to Accept My Business Partner for Who He Was

During a particularly difficult period in my life when my first wife and I were on the brink of breaking up, a business partner was intent on squeezing me out of my most profitable real estate investment in the Midwest. He controlled the purse strings and withheld the money due to me from the investment.

He also made disparaging remarks about my wife and me to our banker. The problem was, we shared the same banker—my partner introduced us—and my partner happened to be one of the bank’s wealthiest clients. The bank called my loans, and I didn’t have the means to repay them.

Accepting this person for who he was and acting in my best interests under the circumstances was not even a consideration. Instead, consumed with unbridled anger and resentment, I foolishly launched a costly five-year legal battle that brought me to the brink of bankruptcy.

My sense of urgency also caused me to miss important doctor appointments for the removal of a small lesion on my nose, which later resulted in my losing half my nose to a vicious tumor and enduring four major reconstructive surgeries.

When an offer to settle came in shortly before trial, my attorney asked me what I wanted out of the case—meaning financially. I righteously announced to him my intention to make my partner stop taking advantage of people and change his unscrupulous business practices.

Dumbfounded, my attorney turned to me and exclaimed, “Danny, you must be kidding! Do you really think you are going to change this man? That’s just not going to happen.”

As I mentioned, accepting my partner for who he was and not trying to change him was not a consideration. At the time, I equated acceptance with surrender and excusing bad behavior—and being weak. I also believed that I had the power to change people’s ingrained ways, which I now know is myth conquering reality!

I have since learned that true acceptance has nothing to do with surrender, backing down, condoning bad behavior, or the like. Rather, true acceptance means accepting people and things as they are without judgment or harboring negative feelings such as fear, anger, resentment, and the like (or at least minimally so).

As such, true acceptance is the detached, even-keeled acknowledgment of the underlying or objective reality—the “how is” and “what is”—of the person or situation.

With that mindset, you are able to accept someone you dislike as they are, and still terminate the relationship if you determine it is in your best interest to do so. You can also change the dynamics of the relationship if cutting ties is not practical or realistic.

For example, you can accept a divisive sibling (or other family member) as they are, and still set boundaries, such as avoiding problematic topics of discussion, or choosing the type, extent, and frequency of contact you wish to have.

The Gifts of Accepting People You Dislike

When you are able to accept people you dislike (or anyone for that matter) as they are, you can then recognize the choices that will serve you best.

Why? Acceptance induces a critical shift in focus from what you are powerless to change or do to what you can do to better serve your needs. In short, accepting what is lets you discover what might be—and no less so when dealing with people you dislike.

I certainly had viable choices with my business partner besides pursuing the combative, self-harming course I chose. One choice was to not sue and instead devote my time and energy—and money—to improving my other properties. However, my unprocessed fear and anger obscured this much wiser path.

A related gift of acceptance is that it brings you freedom by releasing the shackles that bind you to troublesome relationships. (This is particularly true when dealing with past parental transgressions, control freaks, and other “crazy makers.”)

Acceptance is also a great stress and anxiety reducer. When you accept people and things as they are, you have little to stress (and lose sleep) over.

Keys to Accepting People You Dislike

Practicing acceptance with people you dislike is challenging. It is often a process that evolves over time and in which incremental steps are fruitful. Certain keys will facilitate the process.

Unprocessed fear prevents acceptance because it dominates our thoughts instead of allowing us to make the choices that serve us best. Apt acronyms for FEAR are “Future Events Already Ruined” and “False Evidence Appearing Real.”

With my partner, for example, I was in that “already ruined” mode because of my strong fear that his actions would irreparably impact my livelihood—but they in fact wouldn’t because I had other profitable investments.

We thus need to process and reduce our fears in order to benefit from the even-keeled type of acceptance I have described. Most fears are illusory and speculative; they diminish and even leave when they are closely examined.

It helps considerably to examine the objective reality of the person or situation you are dealing with rather than be guided by negative speculations about what might happen and what could be. Face and lean into your fears. Their bark is much greater than their bite. When you so process your fears, their hold over you (and your thinking) will lessen considerably, and viable options and choices will be revealed to you.

In much the same manner, our anger and resentment toward people we dislike obstruct acceptance. Moreover, anger can easily exacerbate situations in ways that are harmful to us, like it did for me when I dueled with my business partner.

The late Carrie Fisher expressed it well in her book Wishful Drinking: “Resentment is like drinking poison and waiting for the other person to die.” (I certainly drank a lot of poison while waiting for my former business partner to change his dishonorable ways!)

It softens the edge of your resentment if you try to see things from the other person’s perspective. Many—perhaps even most—times, people’s behavior is based on their fears, anxieties, and self-interests and not on any intent to harm us.

In the case of my partner, looking back I now recognize that he acted mainly out of the concern about how the break-up of my marriage would impact one of his largest investments.

Look for the good!

Some—maybe most—of the time we are so engulfed in the turmoil with those we dislike, that we can’t see the “positive” influences that they have on our lives. I learned an awful lot from my partner during the years we worked together. He’s a very astute businessman. My departure totally changed my career trajectory. It lead to establishing a real estate investment company in which I have been able to apply what I learned from him in my own business dealings with great success.

Another major gift was that he played a major role in helping me to prove to myself that I can take care of myself under severe pressures and adverse circumstances. I always had doubts about that.

Recognizing these “good” things removed my anger and I was later able to accept my partner for the person he was, even offering a toast to his good health at a dinner gathering of friends following the settlement of the law suit.

Below are some intentions that will assist you in accepting people you dislike as they are.

Process my fear and anger.

Not take what they do personally.

Recognize the fears and anxieties that drive them.

Not assume an intent to harm me.

Trust that I will be able to take care of myself.

Be true to myself.

In doing these things, you will feel less annoyed, more grounded, and more focused on taking care of your needs—and the gifts of acceptance will be yours!

Daniel A. Miller is an artist, poet, successful businessman and bestselling author of The Gifts of Acceptance: Embracing People and Things as They Are, a Library Journal Best Wellness Book of 2018, a Foreword Reviews 2018Book of the Year Award Finalist in Family and Relationships, and the IBPA Benjamin Franklin 2018 Non-Fiction Silver Medal Winner. His 130 articles on the control and acceptance dynamics can be found at danielamiller.com.

Accepting My Autistic Self: Why I’m Done Trying to Fit In

Living with Depression and Anxiety: How to Lessen the Pain